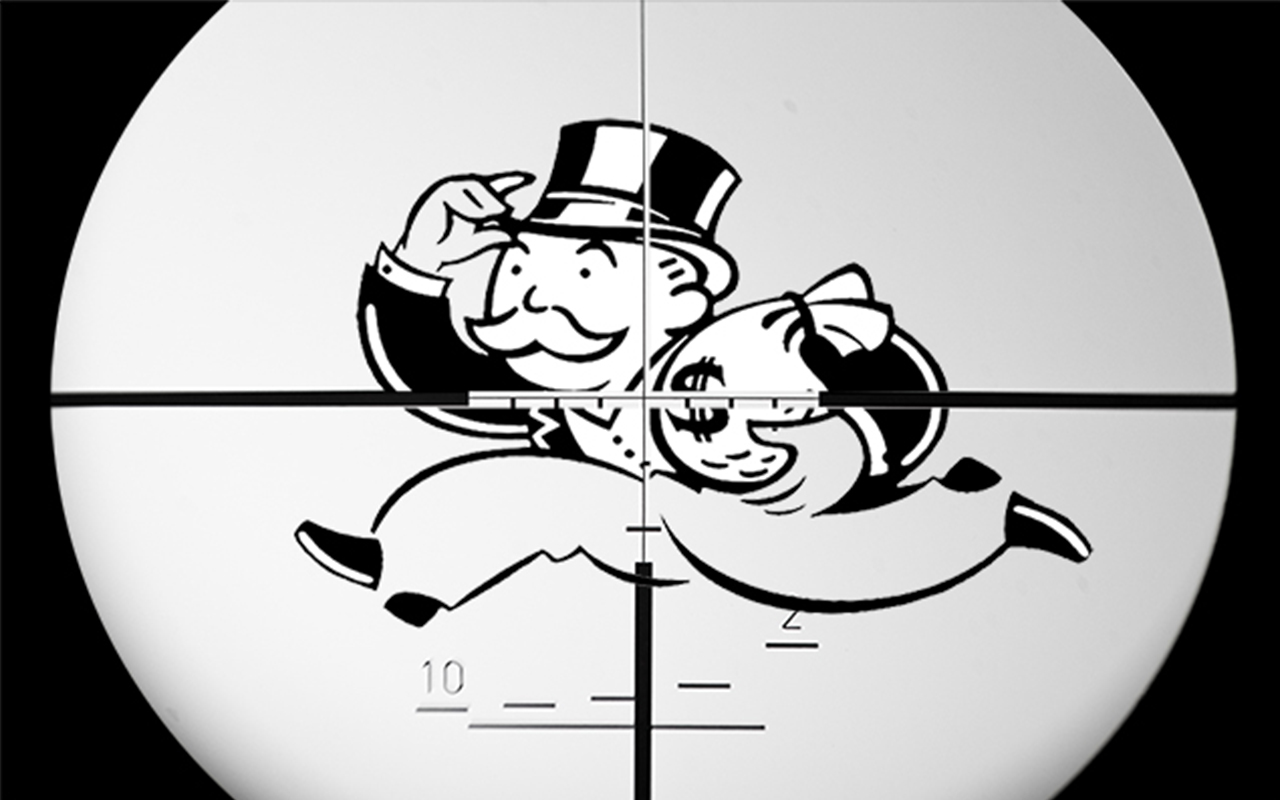 How Bell Pottinger Used #PaidTwitter to Destabilize a Country

Throughout the course of the past few years,  the political discourse of South Africa has resonated with phrases like “white monopoly capital”, “radical economic transformation” and possibly even “economic apartheid”. Even former President Jacob Zuma was fond of using them.

As it turns out, a cache of leaked Gupta emails clearly supports the claim that Bell Pottinger, a controversial UK PR firm was responsible for this narrative, using a barrage of fake bloggers, commentators and Twitter users to sway public opinion and paint the Gupta family as victims of the conspiracy of “white monopoly capital.”

An attempt to salvage the reputations of Zuma and the Gupta family, the social-media driven campaign was designed to serve as a distraction from serious allegations of state capture by spinning the narrative that the SA Communist Party and National Treasury were standing in the way of transforming the South African economy.

According to sources, Tim Bell, a founding member of the firm, apparently left his own firm with key staff members in disgust over the plan, alleging that arms deal facilitator Fana Hlongwane and former-President Zuma’s Gupta-associate son Duduzane paid the firm £100 000 per month to start working on the smear campaign, and that several meetings were allegedly attended by both men.

Evidence was seen that the plan involved Andile Mngxitama and his Black First Land First Organisation, Mzwanele Manyi and his Decolonisation Foundation, the ANC Youth League, the Africa News Network7, Umkhonto WeSizwe and others.

Bell Pottinger is also reported to have manipulated Wikipedia, and several internet-based sources such as Twitter, chat rooms, blogs and news articles related to the Gupta family which were altered to be more favourable to the Guptas.

HOW DID BELL POTTINGER DO IT?

Bell Pottinger was contracted by Gupta-owned Oakbay Investments for an estimated £100 000 per month, starting as early as March 2016. The aim of their campaign seems to have been multifaceted, including:

The aim of this barrage of fake tweets seem to have been to overwhelm other opinions, flooding users with their false narrative and swaying public opinion through sheer numbers. Bell Pottinger was encouraged to foster greater public debate about “economic apartheid” in order to divert negative attention from the Guptas and Jacob Zuma. Leaked documents show that Duduzane Zuma asked for the campaign to “be along the lines of economic emancipation of whatever” and to have a narrative that “grabs the attention of the grassroots population who must identify with it, connect with it and feel united by it”.

At least 106 fake Twitter profiles and their main accounts were identified, all of which were used to sway public opinion with hashtags including:

To lend credibility to the movement, former Business Day editor Peter Bruce as well as media houses such as HuffPost SA, along with 702, Daily Maverick and the Mail & Guardian had their Twitter accounts spoofed and used to retweet the narrative. 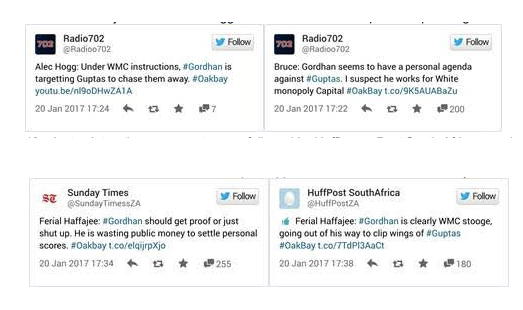 These tweets from “Radio702”, “HuffPostSA” and “The Sunday Times” seem to show Alec Hogg and Peter Bruce, as well as Ferial Haffajee sharing their anti-Pravin Gordhan sentiments, all tweeted out in a matter of minutes, but a closer look reveals them to be from “parody” accounts.

Trying to shift the direction of public discourse, these Twitter sock-puppets stirred up racial tensions that were already bubbling beneath the surface, and proved an effective way to keep the general public distracted from issues like State Capture.

As part of the campaign, Bell Pottinger was also responsible for launching and supporting foundations such as the Decolonisation Foundation and Andile Mngxitama’s Black First, Land First Foundation.

News sites and blogs including www.wmcleaks.com,  around which most of the online pro-Gupta activity was centred, were also utilised in Bell Pottinger’s campaign. Others include the sites Black Opinion, on which BLF founder Andile Mngxitama has a column, as well as Uncensored Opinion, run by Pinky Khobane. These sites are intended to counteract the supposed capture of formal news agencies, such as the Sunday Times and Radio702, by White Monopoly Capital.

In a report commissioned by Bell Pottinger to investigate the Oakbay account, it was found that certain material used in the campaign disproportionately targeted wealthy white South African individuals or companies. The campaign was shown to be racially divisive and in breach of relevant ethical principles associated with the PR firm.

While representatives of Bell Pottinger vehemently deny many of the accusations made against them, the evidence is damning. The 100 000 emails showing correspondence between Bell Pottinger and Oakbay Investments, along with a history of unethical PR practices, suggest that what we know so far may only be the tip of the iceberg. According to a report published by the Bureau of Investigative Journalism in October of 2016, Bell Pottinger was paid $500 million to produce propaganda for Iraq in the style of traditional Arabic news networks and fake insurgent videos.

The London-based PR company was brought into Iraq shortly after U.S invasion in 2004. They were tasked with the “promotion of democratic-elections”, as well as information and psychological operations which were intended to sway public opinion. Bell Pottinger changed ownership in 2012 and its current management board has no connection to the Iraq project, which closed in 2011. However, it is clear that Bell Pottinger has a history of working closely with governments to target public opinion. This form of propaganda is especially insidious when coming from a foreign organisation – particularly one with as corrupt a history as Bell Pottinger. 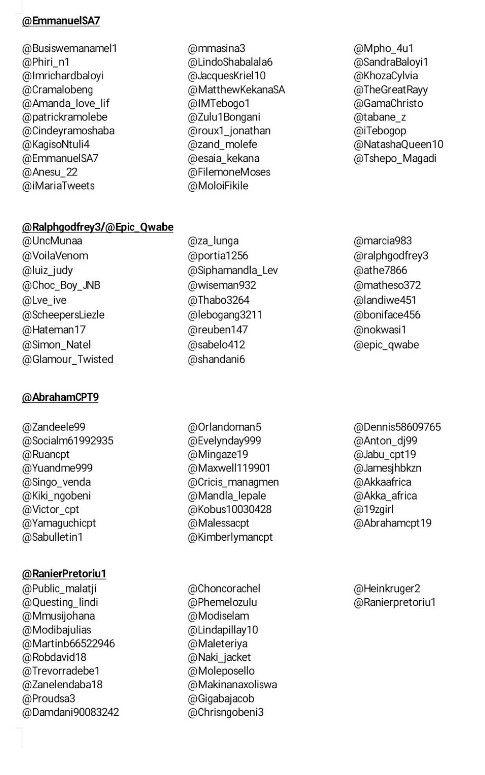 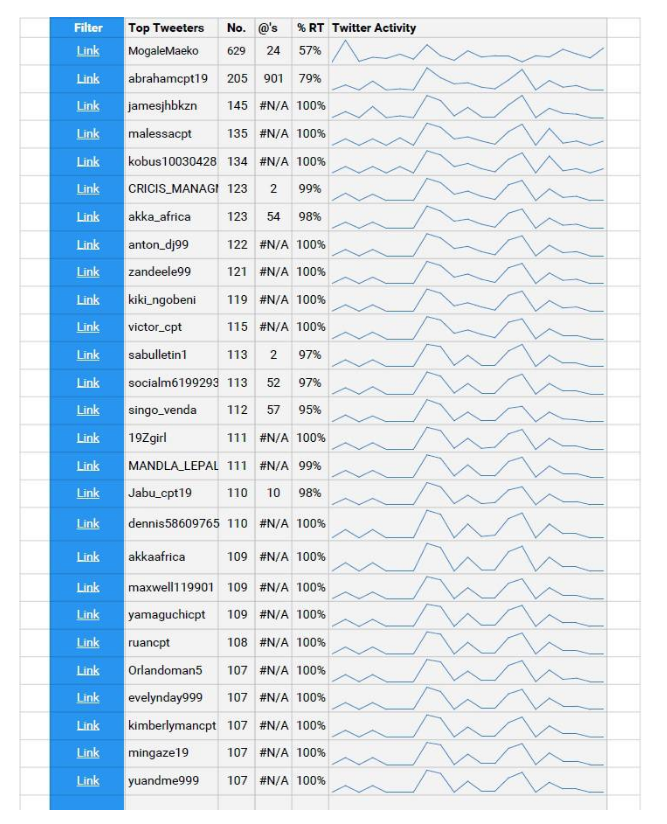